May has arrived and time for our third trip to Galicia in Northern Spain, this time with four friends, two of whom have been before but two have not. The aims of the trip are to taste some great local wines and eat great seafood and for the two newcomers to get a taste of Galicia and we sure did all three. I’ll start with some places and end on the amazing wines.

Our first stop was Lugo one of Galicia’s provincial capitals and famous for being the only city in the world surrounded by completely intact Roman walls, there is a great walk round the top of the walls, well used by locals for their morning walk or run. Lugo however has another claim to fame, probably the best free tapas in Spain. I am lucky enough to have a friend who lives there and on our first visit was staggered to be offered a choice of one hot and one cold tapas with each drink. Who said there was no such thing as a free lunch ! The Rua Nova is teaming with bars, one of the best is A Nosa Cerra and the nearby streets are full of places. Close by is a gem called Pazo Das Pombas, Rua do Mino 9, as well as being an excellent restaurant and bar the owner, an ex history teacher, has created almost an in house museum with original Roman artefacts. The steps leading from the cathedral to the square are named after Luis Pimental, a famous Galician poet from Lugo who was my friend’s uncle by marriage. In the square one of his poems is cast into a tree statue. 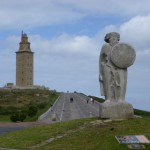 A Coruna Tower of Hercules 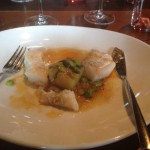 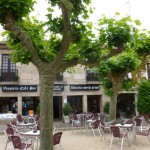 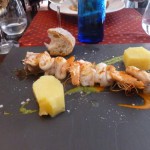 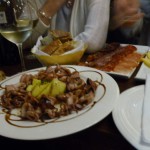 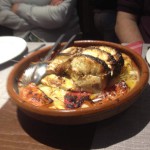 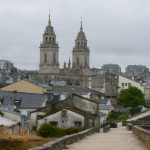 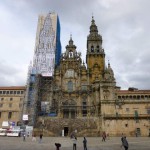 We moved onto A Coruna, a large city set on a spectacular headland with a busy port and a great beach. The city is dominated by the Tower of Hercules and below it a statue of Breoghan the Celtic king who in Celtic myth founded the city. The streets leading up to the main square Plaza Maria Pita are packed with bars and restaurants where you can try the incredibly fresh seafood. El Rey de Jamon, Rua Franja 45, as you may guess however specialises in jamon (ham), it is a grocers and delicatessen with a number of tables and a great selection of meats, cheese and wine along with friendly service. For fish and seafood try La Sarten de Coruna, Plaza de Espana 11, to eat in the restaurant at the weekend you need to book and while it is not cheap it is good value for the quality of food on offer. Jamoneria la Leonesa, Plaza Santa Domingo, is in the old town and is a local haunt well worth a visit. Bar la Bombilla, Calle de Torreiro, is a city institution and has the cheapest tapas in the place, very popular.

Santiago de Compostela has to be on everyone’s list for Galicia and while it is incredibly busy with both pilgrims and visitors from across the world it should not be missed. It also gives you a chance to experience a truly memorable eating experience at Abastos 2.0, they have two places and we ate at Ghalpon just by the market and had the market menu. It consists of a selection of five tapas, followed by a vegetable dish, a fish dish, a meat dish and finally two deserts for currently 35 Euros, for another 10 Euros you can have 4 matching wines. It was truly outstanding, one of the most memorable meals in my travels, every single dish was brilliant. There are a couple of wine bars to recommend, Bierzo Enxebre in Rua de Troya specialising in wines from Bierzo. This is a region not well known outside Spain but it produces some really excellent wines, more on wines later. Also Cervantes, Calle Abazacheria which has a great selection of wines from various regions and also good food. For the more basic option pop into Bar Dubres also in Abazacheria, attached to the supermarket, the free tapas are consistently good and you feel like a real local.

The best known white wine from Spain is probably Albarino and the heart of the production is Cambados a lovely small town famous as well for its seafood, some of which is collected by local women at low tide. I suspect that in the summer the town is probably very busy and although quiet when we visited there were still one or two places worth recommending to try. Lume de Lena, in the Plaza de Rodas, has excellent tapas and wines and lovely service. Most popular with the locals and you can see why is A Casa de Miguel, Calle Real, the free tapas were just staggering not just the quantity but the quality.

If you are travelling by car then a couple of places well worth visiting are Betanzos and Muros both beautiful examples of small Galician towns and Pontevedra a larger city but with a beautiful old part full of colonnaded streets. You should also try to get to Finisterre, the end of the earth, what a spectacular place.

I am cheating by mentioning Villafranca del Bierzo as it across the border in Castilla Leon although I now know it is Galician speaking so can definitely be included. It is in the heart of the Bierzo wine country and is a small attractive but sleepy town, worth a stop for one night if only to try Mi Tienda, Calle Jesus Adran, a grocers shop and wine bar with some great local produce and if you are lucky, customers who are some of the local wine producers.

So onto wine from the region, DO, Denominacion de Origen, is a regulatory classification system used in Spain and Galicia has 5 such areas. DO Rias Baixas is the coastal area centred around Cambados and is famous for albarino white wine, now incredibly popular abroad. There are many wineries you can visit although not that many will have English speaking tours, one of the biggest and best known is Martin Codax on the outskirts of Cambados and a tasting tour can be organised with them for around 15 Euros. Some of the fun is trying the wines in local bars and restaurants and they mostly have a staggering selection, a few names to look out for are Terras Gauda, Don Ricardo and Martin Codax Lias.

DO Valdeorras is on the eastern edge of the province and produces amongst other wines the lovely godello white wine, this is becoming more popular and is similar in many ways to chardonnay and do not let that put you off. One that we tried was called 1957 although I have been unable to source the winery, other well known names include Louro, Godeval and Guitian.

DO Monterrei is a relatively small area on the Portuguese border and from there we tried Quinta da Muradella white from treixadura grapes and what an outstanding find it was, although many in this area also use the godello grape.

The remaining areas are DO O Ribeiro, mainly white wines and DO Ribeira Sacra, mainly red wines, this area contains some spectacular scenery around the very high terraced vineyards which seem to hang on the edge of the gorges.

There has to be a mention for DO Bierzo which produces some amazing red wines mainly from the mencia grape. We visited the winery Dominio de Tares and were amazed by the quality and the entrance fee for a four wine tasting of I think five euros was deducted from any purchases. Look out for the reds from Bierzo.